Some Types Of Memory Include:​

Block diagrams are visual representations of how sub-components of a system relate. These are invaluable when it comes to integrated circuits and micro controller units (MCUs) because it very quickly can show what the capabilities or a chip are and that capability's relationship to all the other functionality in the system. In the context of memory, this can show us how we can access a peripheral, memory, or some other control logic that may be multiple bus accesses away from the CPU.

Here is a block diagram of the Atmel AT91 SAM9G20 Micro Controller (from p4 of the datasheet): 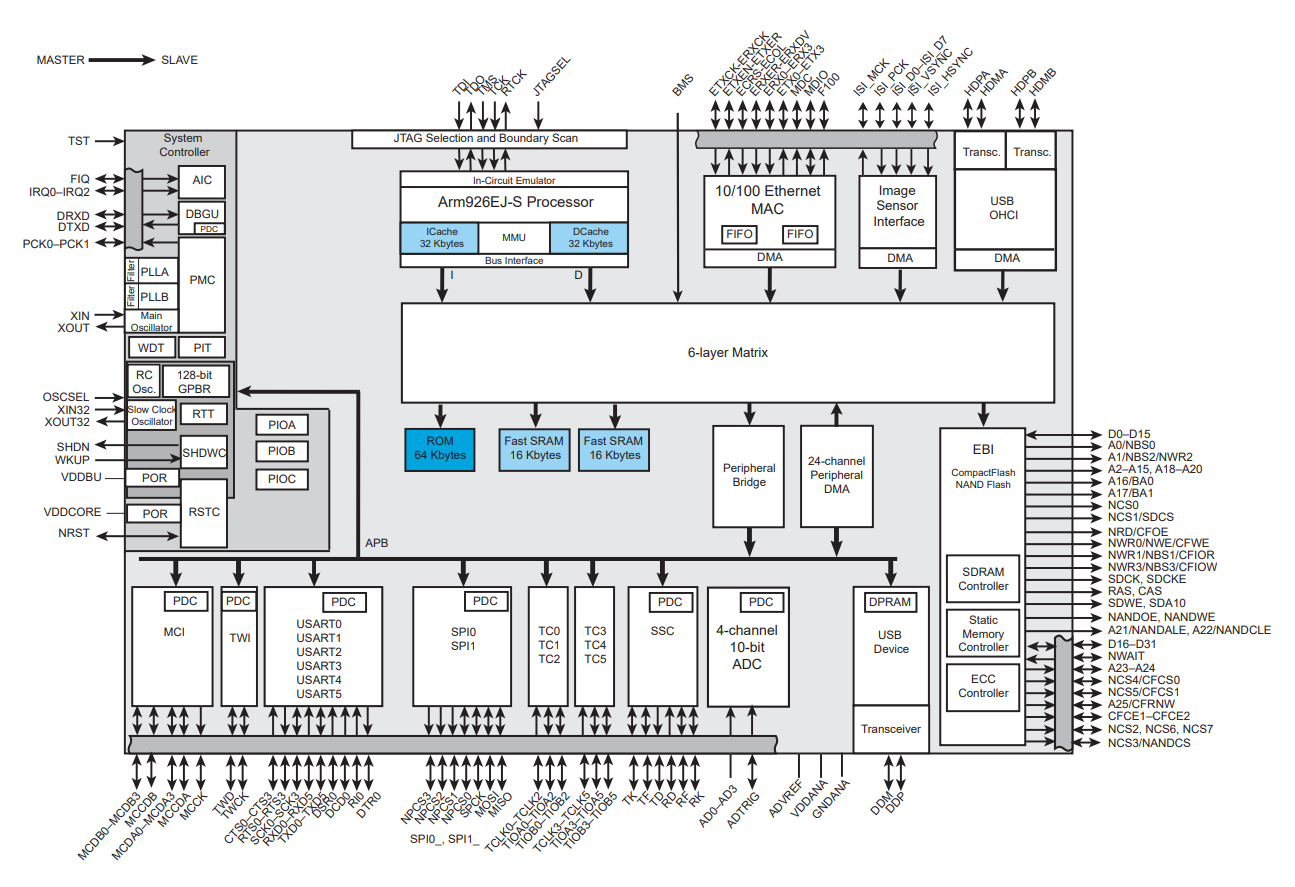 Some quick observations tell us: 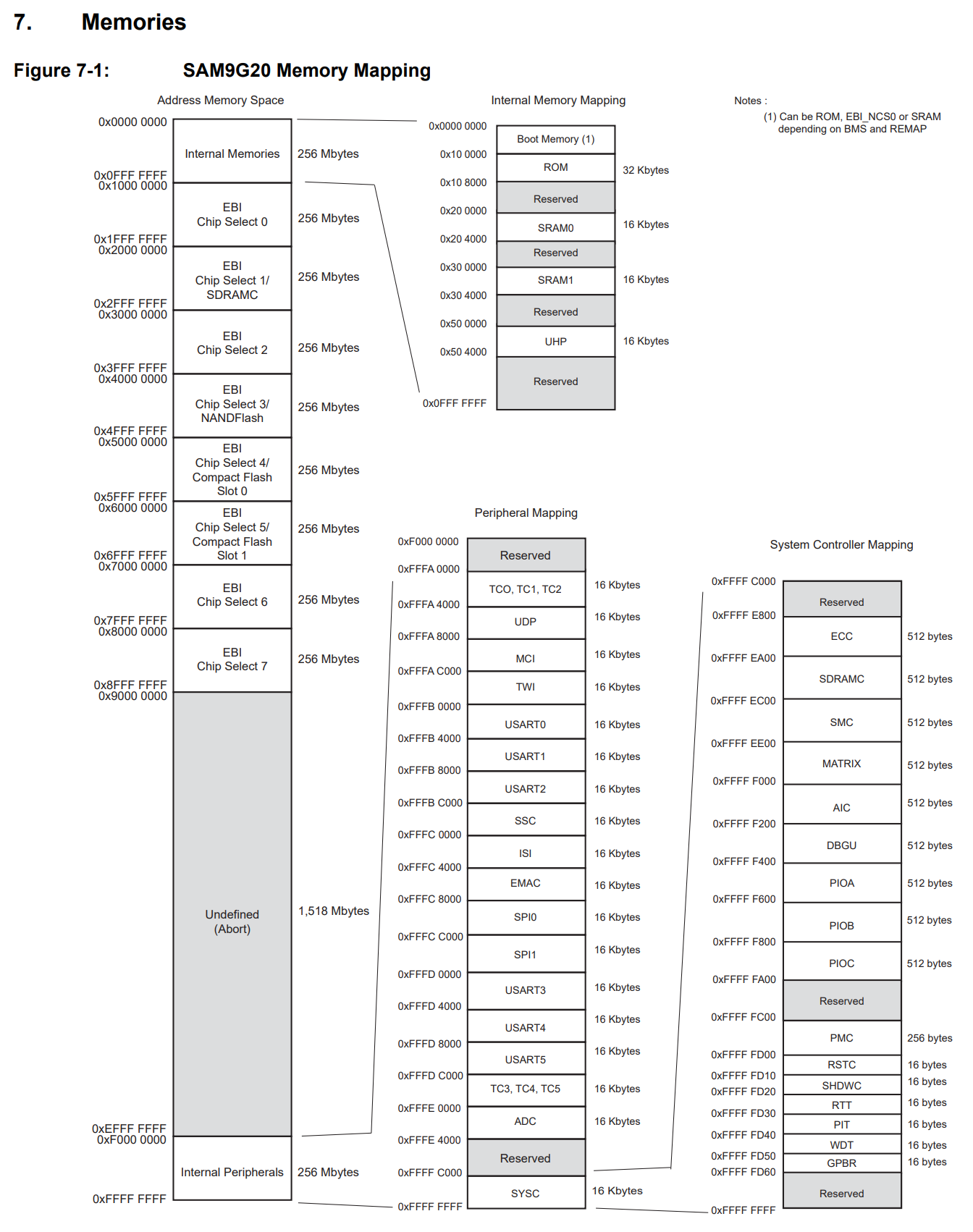 Read Only Memory (ROM), often is not truly read-only. The exception is masked ROM, readable memory that is burnt into the circuit and is closest to true read-only memory. ROMs are usually are writable with constraints. For example, they may be write once, or may require erasing the entire chip to overwrite an already written byte. Write once per erase is not unlike an Etch-A-Sketch, where you draw an image and have to erase the entire image to undo a mistake. Modern flash usually requires erasing an entire 4k block of space to change a single byte. You can image a block erase model as an array of Etch-A-Sketches where you only need to shake a single Etch-A-Sketch when a mistake is made. 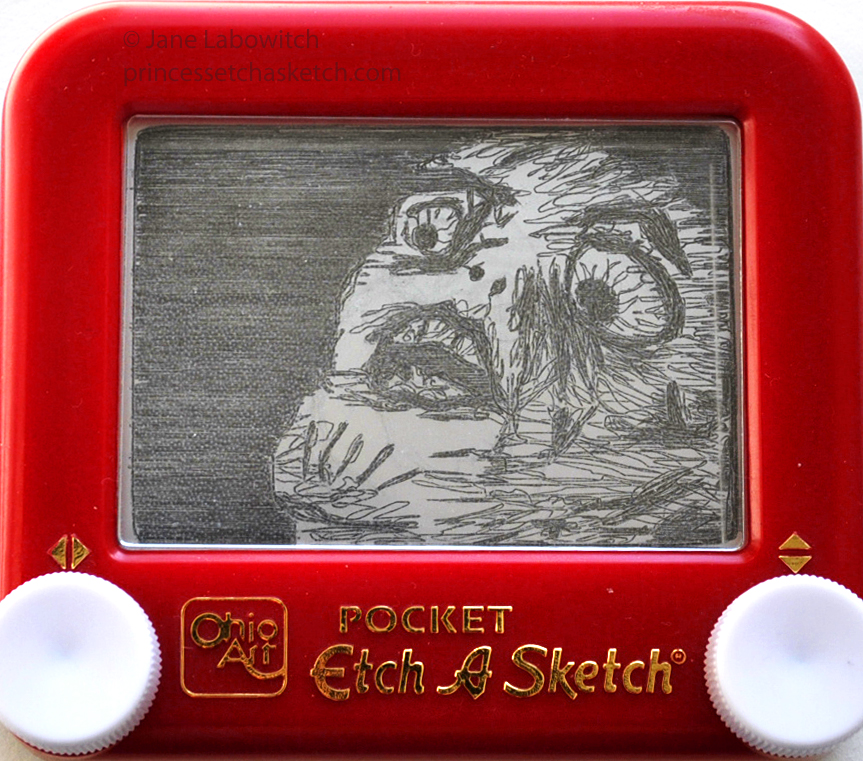 Random Access Memory is the type of memory that most software developers are familiar with. But do you know how memory values are retrieved? Most RAM architectures are mapped into matrices that have an array of word-lines/rows and bit-lines/columns. Within RAM there are two major types: dynamic RAM (DRAM) and static RAM (SRAM).

What is the difference between dynamic RAM (DRAM) and static RAM (SRAM)?

Whether the memory is based on SRAM or DRAM, its broken down into a grid. This grid has a decoder and a multiplexer that selects the row and column to fetch from the grid. To get wider memory we simply add more grids and decoders/multiplexers to filter our output down to the single bit we've requested from our address. When addressing memory, the address value itself can usually be broken down into rows, columns, and chip selects. This is how the system knows how to get the data that is requested. Take a look at the following diagram: 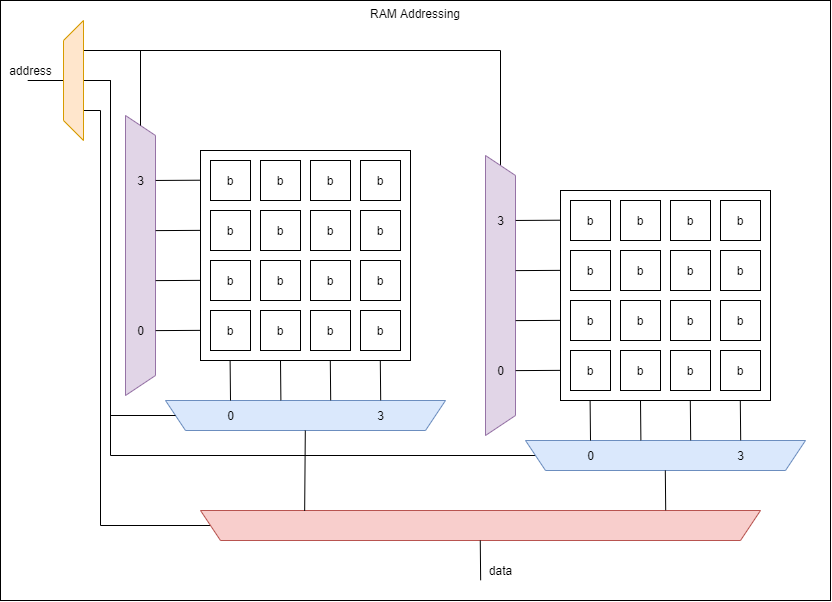 This diagram shows an address at the top left (i.e. the input) and a data output at the bottom (i.e. the output). The address is 5 bits. These 5 bits are broken into 3 parts:

Note: The break down of the address to rows/cols/chip-selects is completely arbitrary. That said, there are some advantages and disadvantages to the order that is selected. For example, using higher bits for more significant groupings can allow easier management of memory in software. Using the opposite ordering can spread memory access across the chips, allowing for faster DRAM performance because DRAM has refresh latencies from chip to chip.

Registers are a very small type of memory that plays a critical role in a CPU architecture. While many NN-bit (e.g. 8, 16, 32, 64) architectures have a set of registers, some components have registers that are a single bit. Registers are basically an array of these single bit storage bins.

FIFO stands for first-in-first-out. Its a buffer pattern and is good for different clock domains. Often, the physical layer of various protocols are timing sensitive whereas the high level software is not. Having FIFO buffers allows the timing sensitive operations in hardware to continue filing a buffer while it waits for software to service the buffer.

CAMs are generally used for networking equipment to quickly search for values from packets for switching or routing. Binary CAM access requires a complete key to look up a value whereas a ternary CAM access allows wild card bits (i.e. don't care bits) to be in the query.